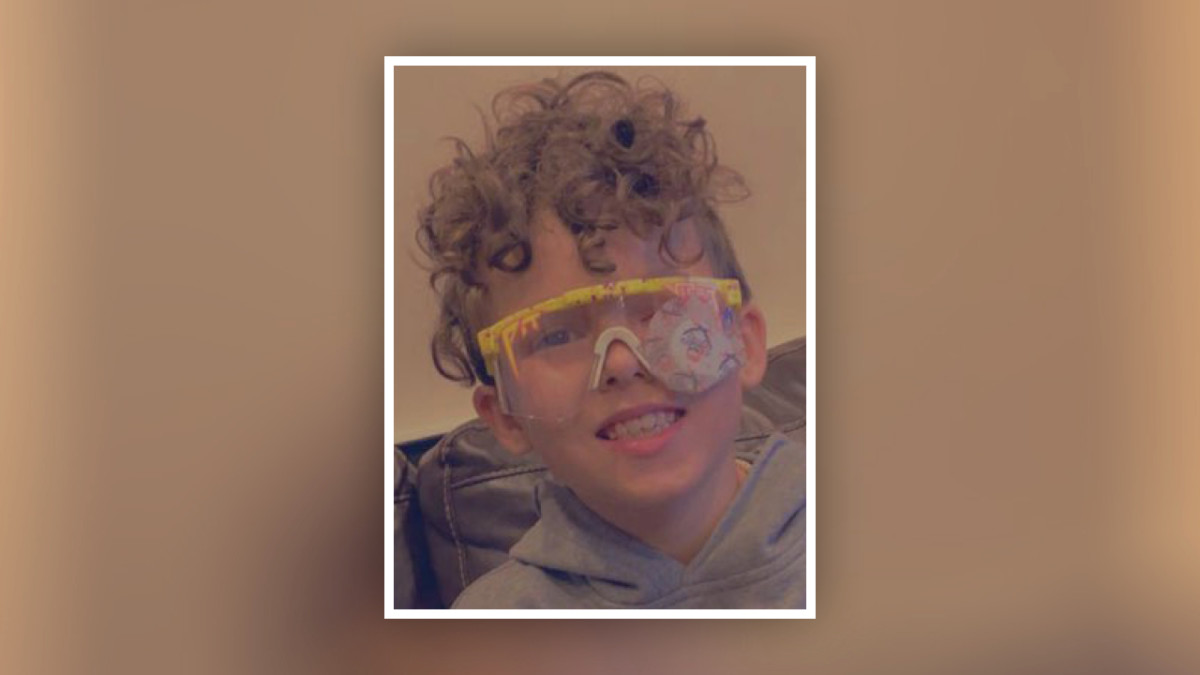 Every Christmas Eve, eight-year-old Skyler Hinson and his family shoot off fireworks to celebrate the holiday season. On Dec. 23, 2020, they decided to go ahead and shoot off some of the fireworks ahead of the rain on Christmas Eve. Hinson, his three-year-old sister and great-grandfather, went out into the backyard to kick off the festivities, only for Skyler to come running to his mom a few minutes later.

“He said [his sister] shot him in the eye with a firework,” his mom, Beth Smith, said. “I didn’t believe him at first because he wasn’t bleeding or anything. His eye was closed, kind of like he was holding it closed.”

His little sister picked up a roman candle-type firework. She was holding it in her hand when it went off without warning, firing right at Hinson, who just so happened to be standing in the wrong place at the wrong time. The projectile hit Hinson in the left eye but, thankfully, didn’t explode in his face.

“It was like a freak accident, and he just happened to be right in front of it,” Smith said.

Unable to drive in her state of panic, Smith asked Hinson’s great-grandfather to drive him to a local hospital in South Carolina; she would meet them there once she could find someone to watch his little sister. When she finally arrived at the hospital, the providers were already in talks about transferring him to the Joseph M. Still (JMS) Burn Center at Doctors Hospital of Augusta, GA, the largest burn center in the nation and the headquarters of Burn and Reconstructive Centers of America (BRCA). The South Carolina native was prepared for transport and loaded onto a medical helicopter headed for Georgia a few hours later.

Upon arrival at the JMS Burn Center, he was diagnosed with a ruptured cornea that required six surgeries to clean and repair, beginning with debridement.

“At first, he had to have surgery like every other day,” Smith said. “They were in there trying to get some of the debris out. There ended up being debris in both eyes, but obviously one had more than the other. Then, they were trying to rebuild it and let it heal so it would heal back right. It would be leaking fluids and stuff, and they would patch it up.”

Throughout the recovery process, Hinson has kept a light, joking attitude, even pretending to be asleep in the hospital bed, so he could jump up and scare his mom. At school, his teachers allow him to wear sunglasses to avoid the other kids thinking he’s any different from them. The hardest part about his accident, Smith said, isn’t the procedures or school but staying positive in the face of uncertainty.

“He asks me if he’ll be able to see, and I’ll automatically tell him yes because I want that so badly for him, and I don’t want him to worry or stress over it,” Smith said.

Hinson’s eye has been permanently shut for more than six months now. When the doctors initially shut his eye, giving it the time and space to heal, Hinson was able to see lights and shadows. Smith is setting up an appointment for Hinson with BRCA’s Chief of Plastic and Reconstructive Services, Dr. Rajiv Sood, hoping he can do more to help her son be able to see again.

“Seeing him have to go through this is heartbreaking,” Smith said. “I wish I could just give him both of my eyes so that he would be able to see again.”

In the meantime, Hinson continues to do what he loves most: joking around, playing outside and socializing with his second-grade classmates. Only time will tell what he will see with his eye, but his mom is optimistic.

“I think it’s just going to be a recovery, and he’s eventually going to be able to see,” Smith said. “I hate this for him. He did not deserve this. But he hasn’t let this bring down his spirit or anything like that. He’s still the happy, joking kid he’s always been.

Fireworks are dangerous for adults and children of all ages. Fireworks are burn and fire hazards due to their tendency to discharge early or late, blow up, heat up to extreme temperatures, fall over, misfire and more. BRCA advises against fireworks, especially in every day or residential capacity. We encourage everyone to view professional firework displays or find safer alternatives, such as bubbles, bio-degradable confetti, glowsticks, etc.

To find out more about the hazards of fireworks, click here.