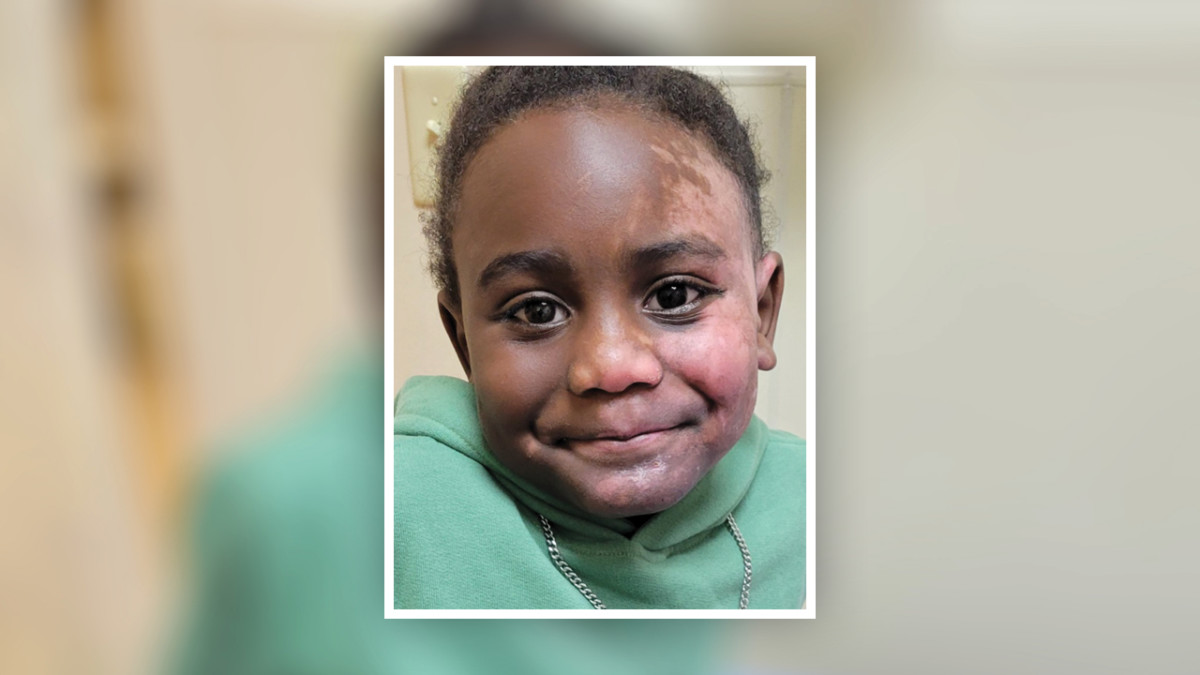 After suffering burns from boiling noodles, five-year-old wants to be a firefighter

Jamie Harden was getting off work on New Year’s Day 2022 when she received a call from a family member that her five-year-old nephew, Je’Siyah Brown, had gotten burned in a home accident.

“Je’Siyah got burned by mistake,” Harden said. “His older brother, who is seven, was cooking noodles in the microwave. Je’Siyah was bending down eating his cereal when his brother came from the microwave with the bowl of noodles. He came over Je’Siyah’s head and, when Je’Siyah went to stand up straight, and that’s when the bowl tipped over.”

Harden has been the guardian of Je’Siyah and his brother since their mother passed away unexpectedly in May of last year. The boys were visiting a family member’s house while Harden was at work when she got the call, but she could hardly imagine how severe his burns were until she saw them for herself.

“When he came outside, I could tell that it was more severe because his skin was pale on one side and, as soon as the air hit his face, his skin just started bubbling and falling off,” Harden said.

Most microwaves heat food to a maximum temperature of 212°F—the boiling point of water. The American Burn Association reports that it only takes five seconds for a third-degree burn to occur at a temperature of 140°F, and the maximum safe bath water temperature for young children is 100°F. When ramen noodles are cooked in the microwave, it can be assumed that the bowl of noodles can be anywhere from 150°F – 212°F if not left to cool before being taken out of the microwave. At that temperature, the boiled noodles caused severe second-degree burns on Je’Siyah’s face, back, shoulders, arm and hand.

In need of emergency care, Je’Siyah was taken to the Joseph M. Still Burn Center at Doctors Hospital of Augusta, where he was treated by Burn and Reconstructive Centers of America’s Dr. Kade Hardy.

When asked about the frequency of ramen noodle burns suffered by pediatric patients, Dr. Hardy said he sees them very often.

“I would say a majority of our pediatric burn injuries that we treat here are related to hot noodle burns,” Dr. Hardy said.

With all that Je’Siyah has gone through over the past year, Harden sometimes worries how all of this may affect him in the long run and does her best to ensure that he has every opportunity to be open and expressive.

“I do different things with him,” Harden said. “I sit down and tell him to draw and express his emotions through writing and drawing and stuff of that nature. I talk to him just to see where his mindset is at. But he’s still being a five-year-old. He hasn’t changed.”

The accident has been hard on Harden and Je’Siyah in different ways. For Harden, she struggles with the guilt and anxiety of what happened and constantly wonders if there was some way to prevent it, but every day that goes by is another day of healing.

“I know that accidents happen, and I know I can’t go back, and I can’t change anything, so I’ve kind of come to terms with everything that’s going on,” Harden said. “Every day I see him progress, and I see his face getting better. It doesn’t make the situation any better, but I’m just thankful that it wasn’t any worse than it was.”

At just five years old, Je’Siyah doesn’t yet understand everything that is going on, but even he can see the face looking back at him in the mirror and wonder when it will go back to normal. For his birthday this year, all he wants is a pool party and for his face to be completely healed.

Je’Siyah has returned to kindergarten for the first time since the accident. He and Harden were anxious about what the other kids might think of him now that he has scars on his face, but, with help from his teachers, they have created an atmosphere of caring and acceptance towards Je’Siyah.

Overall, he hasn’t let his burns get him down. He said he wants to be a firefighter when he grows up and looks forward to his next appointment close to his sixth birthday coming up in March.

“I’m ready to go back [to the burn center],” Je’Siyah said. “I need some more coloring books and crayons and rings! And I liked the nurses. They were sweet.”

Children and older adults have thinner skin resulting in quicker, more severe burn injuries. Water temperatures that wouldn’t normally burn the average adult or teenager have the potential to burn those with thinner, more fragile skin. Also, due to a child’s smaller proportions, a spilled cup of coffee or a scald burn will cover a larger area of the body than it would on an adult patient.

Microwavable ramen noodles are among the most frequent pediatric burns treated here at Burn and Reconstructive Centers of America. Follow these helpful tips to help avoid a ramen noodle scald burn in your kitchen: