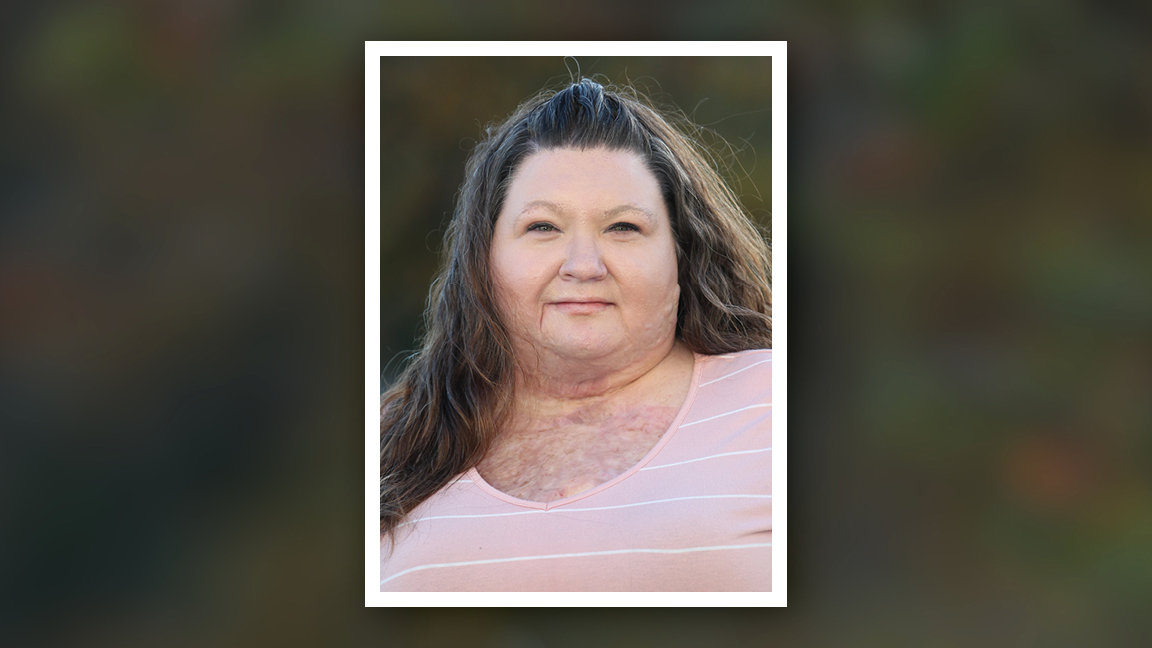 “Let me tell you about the good that has come out of it.”

Kidnapped and set on fire, Stacy Frank was left to die.

“I had second and third degree burns on 40 percent of my body. Both my arms, my chest, and up to the very bottom of my cheek from the bottom of my lip down are burned,” said Stacy. “The doctors gave me only a 20 percent chance of living.”

In November 2017, Stacy broke up with her boyfriend and was determined to remove him from her family’s life, fearful his abuse of her would soon extend to her 12-year-old son. After discovering the eviction papers, the now ex-boyfriend told her that he would leave if she would take him to a pawnshop to get money for a bus ticket.

“We did go to the pawnshop. We did get the money. But he refused to take me home. We drove around for hours out in the middle of nowhere. And he confused me because I didn’t even know where we were,” she said. “I just had this dreadful feeling that something really bad was going to happen.”

Eventually, he pulled the car over and told her he had a headache and that she would have to drive.

“As soon as I got out of the car, I walked around to the back, and all of a sudden there was this big ball of flame,” she said. “I was engulfed immediately. I started rolling around on the ground, and I was able to put myself out. He took off in the car and left me there. And I took off running in the opposite direction.”

Stacy’s ex-boyfriend had thrown gasoline on her and lit her on fire. Thanks to a few passersby who saw her running up the road, she was taken to a local hospital for lifesaving care. Once stabilized, Stacy was transferred to the JMS Burn and Reconstructive Center at Merit Health Central in Jackson, MS, where she spent 5 months, including 2 in a medically-induced coma. During her time at the burn center, she underwent several surgeries and began the process of physical rehabilitation.

“I almost lost my right arm but, thank God, they were able to save it. And I couldn’t hardly move my thumb at all. I mean it was like barely a wiggle when I first started out,” said Stacy. “I paint as a hobby, and I was upset because I thought I wouldn’t be able to paint again. But I’m actually back to painting now.”

Three years later, Stacy is moving forward with her life. She is going to the gym to get her body back in shape after the coma severely weakened her muscles. She is seeing a therapist for her PTSD. And she is undergoing laser scar revision therapy.

“I started thinking about laser therapy right about the time I got my motor skills back,” she said. “I had my skepticism about it, but it’s miraculous. I have people who come up to me who can’t even tell I’ve been burned.”

JMS and BRCA surgeons use fractional lasers which are a less invasive, multifaceted treatment that not only have the ability to change the color and texture of scars but to soften them as well. This returns elasticity to stiff areas that might otherwise require more surgical procedures.

“I had bands all underneath my arms that they thought they were going to have to go in and cut and clip. They thought that I would have to go back through physical therapy again,” she said. “Instead, they’ve been able to do the laser on them, and it has softened them up tremendously to where they’re more flexible. It allows me the stretch that I need.”

Stacy admits that, at one point, she tried “every kind of allergy pill” and used various anti-itch creams to try to mediate the aggressive itching associated with her scars. The skin irritation kept her up at night and was prevalent throughout the day. It wasn’t until laser therapy that she was given relief.

“The itching has almost completely stopped. I itch every once in a while, in like one little spot, and it’ll be a small itch. But it’s nothing compared to what it was. It was miserable,” said Stacy.

She said lasers are even helping her get future reconstructive surgery.

“My earlobe on my right ear is messed up and they are actually going to reconstruct it for me, but the doctor wants it to soften up more. And it’s softened up a whole lot compared to what it was (before laser intervention). It was very stiff,” she said.

Stacy tells new laser patients she meets at her appointments at Merit Health Central to not expect results right away. But, she says, “I recommend anybody who is thinking about having laser surgery to just try it. The change comes gradually but, eventually, the scars will start to look and feel better.”

Since the traumatic incident, Stacy is dedicated to telling her story, visiting jails and rehabilitation centers to advocate against domestic abuse. She hopes one day to write a book to share her experience with those living in risky situations or other burn survivors. It has taken her awhile to come to terms with what has happened to her but, through connecting with people, therapy, and laser scar revision, she is proud to be where she is today.

“When people ask about it,” Stacy said, “I say, ‘Yes, it was a horrible thing that happened but let me tell you about the good that has come out of it.’”