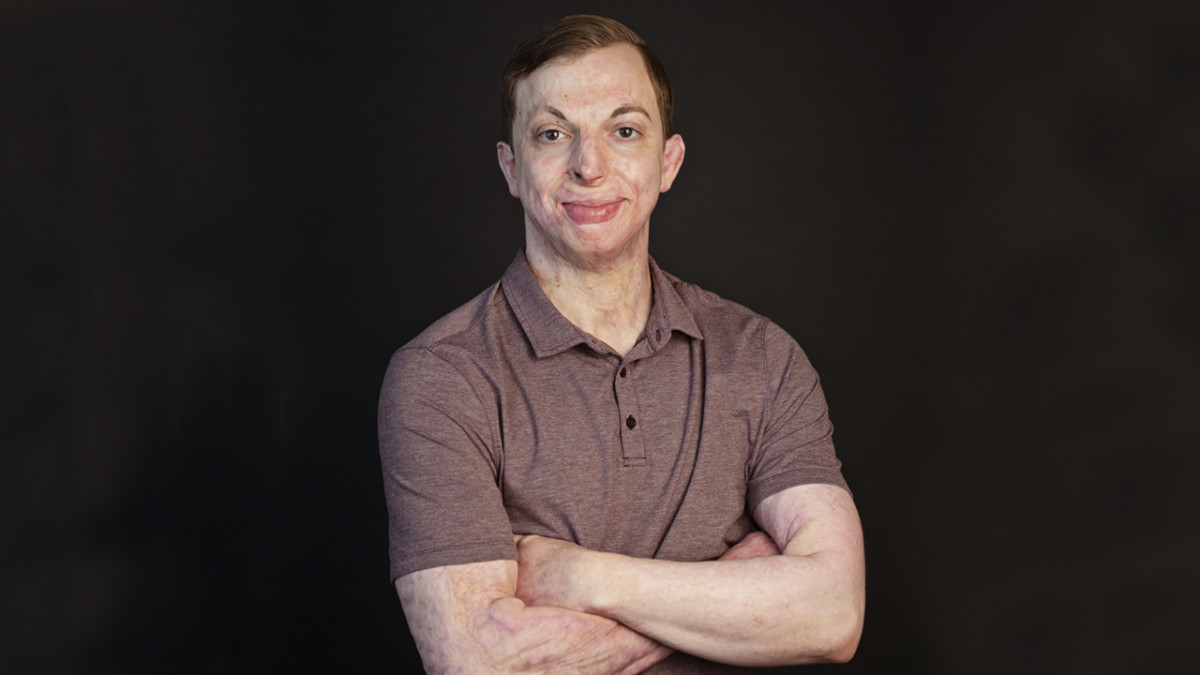 “I ran off the road,” Cooper said. “The car hit a ravine and flipped on the passenger side door. At that point, the fire was spreading, and I tried to get out, but the door was jammed, and I couldn’t break the driver side window.”

Finally, desperate to escape the burning car, he kicked out the windshield as bystanders came rushing down the embankment to help. They helped pull Cooper out of the car and carried him back up to the interstate, where he said he looked down at his legs to find everything was stripped off.

“I didn’t really know how bad things were until I got up there,” he said. “They sat me down, and I immediately went into shock. A wave of pain came over me, and it was pretty much lights out from there.”

Paramedics transported Cooper to a local hospital in Birmingham, AL, where he was intubated and stabilized. Cooper was given a grim prognosis with full-thickness, third-degree burns covering 80% of his body.

A few hours away in Georgia, a family friend heard the devastating news and called them to offer any help that he could.

“My sister’s (now) father-in-law approached my dad and said, ‘hey, I know this great burn surgeon, supposed to be the best in the world. Do you want to talk to him?’” Cooper said.

His family didn’t give it another thought. They called Dr. Mullins immediately for a second opinion.

“It really wasn’t a few minutes later when my dad was on the phone with Dr. Mullins,” Cooper said. “That phone call saved and changed my life.”

Within 24-hours, Cooper was life-flighted to the Joseph M. Still (JMS) Burn Center at Doctors Hospital of Augusta, GA, the largest burn center in the nation and the flagship facility of Burn and Reconstructive Centers of America, the most extensive system of burn care in the country. First, he underwent a 7–8-hour debridement surgery to remove the debris and dead tissue from one side of his body. When he responded well to the extensive procedure, the surgeons then repeated this process on the other side of his body for a total of 14-16 hours of surgery over the first two days.

“There was never a dedicated medical coma, if you will, but there were a lot of drugs involved to create amnesia,” Cooper said. “In my case, I was responsive enough to assist rolling over one second, and the next second I had no control or recollection. It’s all by design—you don’t want to remember, especially the first weeks and months, you don’t want to relive that pain.”

Cooper spent a total of five months as an inpatient in the burn center, but the acute phase of his treatment would continue over the next two years.

Most who suffer from severe trauma, burns or skin and soft tissue disorders cannot leave their bed for weeks to months, which often leads to extreme muscle deterioration. This deterioration can affect walking and sitting up in bed, rolling over and fine hand movements and arm strength. In addition, if the patient has a breathing tube in place, they may also require speech therapy once the tubes have been removed to help recover the throat muscles.

“It was weird, to say the least,” he said. “I went from a regular 24-year-old, going to the gym and living life, to not being able to roll on my side unassisted.”

Once patients wake up and are aware of their situation, the most challenging part of their immediate recovery can be finding the motivation and the open mind to actively participate in their care plan. Cooper explains that struggling to find that motivation is normal for survivors dealing with trauma, pain and a life that has been flipped upside down. However, the healing process, how quickly it happens, or how well the outcome often depends entirely on the patient’s willingness to work with the burn team.

“When you’re a patient, especially in the burn ICU, your only job is to get better,” Cooper said. “Most of the time, you don’t want to move because it creates pain, or you get tired, but that has to become your full-time job. Your only focus should be adding maybe one or two steps to the four or five you took the day before.”

While physical injuries are visible and easier to identify, emotional and psychological trauma is often overlooked due to its subtle nature. Changes in appearance or function are two of the most common causes of the mental health crisis in burn survivors. The psychological impact felt by patients is a fundamental reason why the JMS Burn Center partners with peer supporters, like Cooper, to help address these issues early in the healing process.

“Everyone’s focused on getting the patient healthy, but, anytime you have a patient that has sustained big burn or a traumatic event, there are so many other things, resources and people that need to be involved to make sure their health and wellness are supported,” Cooper said. “When you’re there, it seems like you’re never going to get out of the ICU. So, anytime I can provide any level of comfort for a patient, if I can be an advocate for them, I will.”

As a member of the Phoenix Society’s SOAR (Survivors Offering Assistance in Recovery) Program, Cooper is trained and certified to offer volunteer peer support to those in the burn center. Unfortunately, since COVID-19 began spreading a year ago and the distance to the burn center from his home in Alabama, Cooper hasn’t been able to visit patients in person as much as he would like but continues to reach out virtually as much as he can.

It’s been five years since the accident that made Cooper a burn survivor. Today, he works for an employment screening center and continues being a peer supporter for the JMS Burn Center whenever there is a patient who might benefit from hearing his story. While he understands his miraculous recovery serves as an example of what advanced, specialized burn care treatment can accomplish, he also knows that he is an inspiration to those still in the ICU who maybe facing the same prognosis he did.

“As far as telling my story and going into detail, I love it. For me, talking through things is a part of sustaining my mental health,” Cooper said. “There are a lot of patients I see that aren’t living a full lifestyle because they’re holding themselves back in one way or another. There are occasions where I find myself doing the same thing, but I try to push through those moments and get to the other side.  Tomorrow is always another day to grow and improve.”