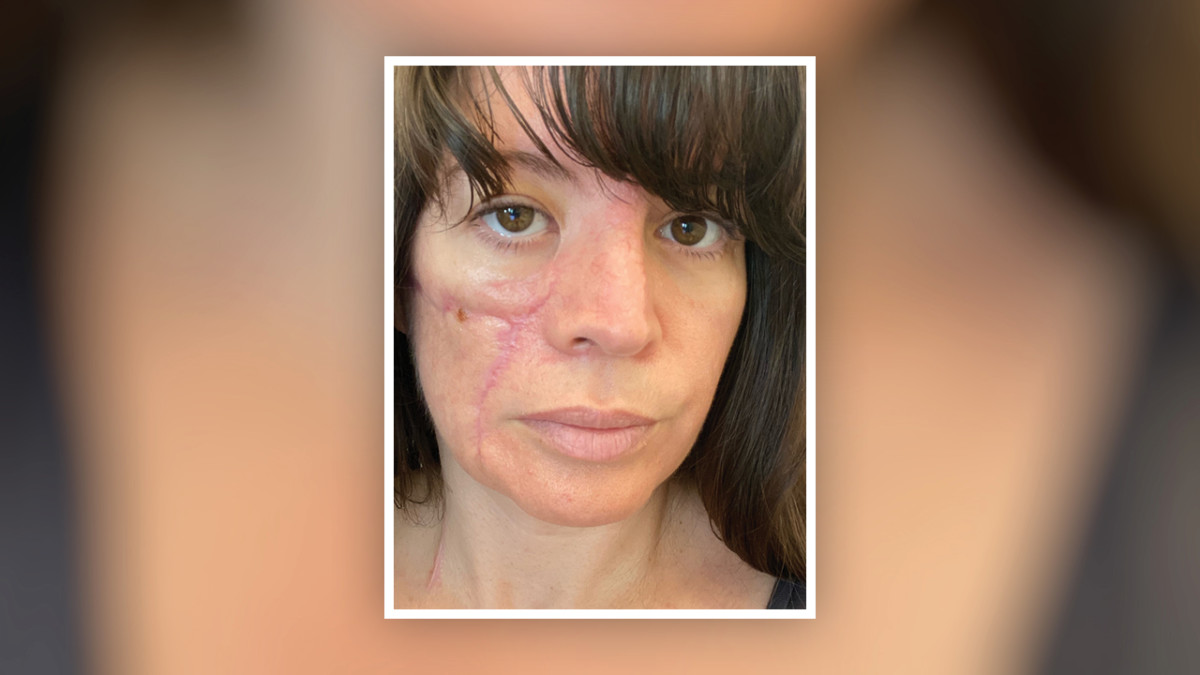 Visiting a house with pets may seem like an everyday occurrence, however, unfamiliarity between guests and pets can cause a lot of stress that may lead to defensive or aggressive behaviors for both parties. Greenville, SC, native Nicole Cantin experienced this firsthand when a first-time visit to a friend’s house in Georgia led to her being viciously mauled by one of the friend’s large-breed dogs.

The pair were casually walking around the backyard with the two dogs following closely behind. Still dressed for church, Cantin’s heel became stuck in a hole, and she stumbled. When her friend went to help her up, one of the dogs attacked.

“When I tried to get up, the dog ran over and started attacking my face,” Cantin said.

Cantin’s friend was able to pry the dog off her, but the damage had already been done. The left side of her face had been ravaged by the dog, leaving her bleeding and missing 60% of her cheek. Her injuries were in desperate need of medical attention.

When help arrived, Cantin was transported to the headquarters of Burn and Reconstructive Centers of America’s (BRCA) Joseph M. Still Burn Center in Augusta, GA, where she met plastic and reconstructive surgeon Dr. Piotr Skowronski.

“He had a really good plan as to what he was going to do,” Cantin said. “I immediately felt comfortable.”

Her injuries were much deeper than the surface of her face and needed more than skin and tissue reconstruction. Cantin was suffering from a shredded saliva gland, damaged facial muscles, multiple lacerations and a mangled cheek.

To help prevent infection, Dr. Skowronski debrided or deep cleaned the wound bed when Cantin first arrived in the emergency room as his first course of treatment. The next phase was to reconstruct her muscles, saliva gland and facial tissue. For this, he was joined by BRCA plastic and reconstructive surgeon Dr. Rizal Lim.

“They were able to put a stent in the saliva gland that was completely shredded and repair that thankfully, but three of my muscles were completely trashed,” Cantin said.

Dr. Lim was able to repair one muscle with a bioproduct but told Cantin it could take up to a year to see muscle movement again. However, at her last appointment, Dr. Lim said he already saw some improvement in the function of her cheek.

With the saliva gland and muscles repaired, there was only one thing left to do: figure out how to give her back the tissue ripped from her cheek.

“They did something that I still find amazing: a reverse face lift,” Cantin said. “They made a cut by the side of my face down to my clavicle and pulled the skin from my neck into position. I do have limited range of motion because of that, but Dr. Lim said they could loosen that up once everything is finished healing.”

Cantin underwent more than 30 rounds of hyperbaric oxygen therapy (HBOT) to decrease her risk of infection and to expedite the healing process. HBOT is a chamber in which patients, like Cantin, are placed in to receive 100% oxygen at a higher-than-normal pressure. This form of treatment fills the patient’s bloodstream with twenty times the normal amount of oxygen and assists with wound closure, carbon monoxide poisoning and decompression sickness. It is especially important for patients who’ve received skin grafts. 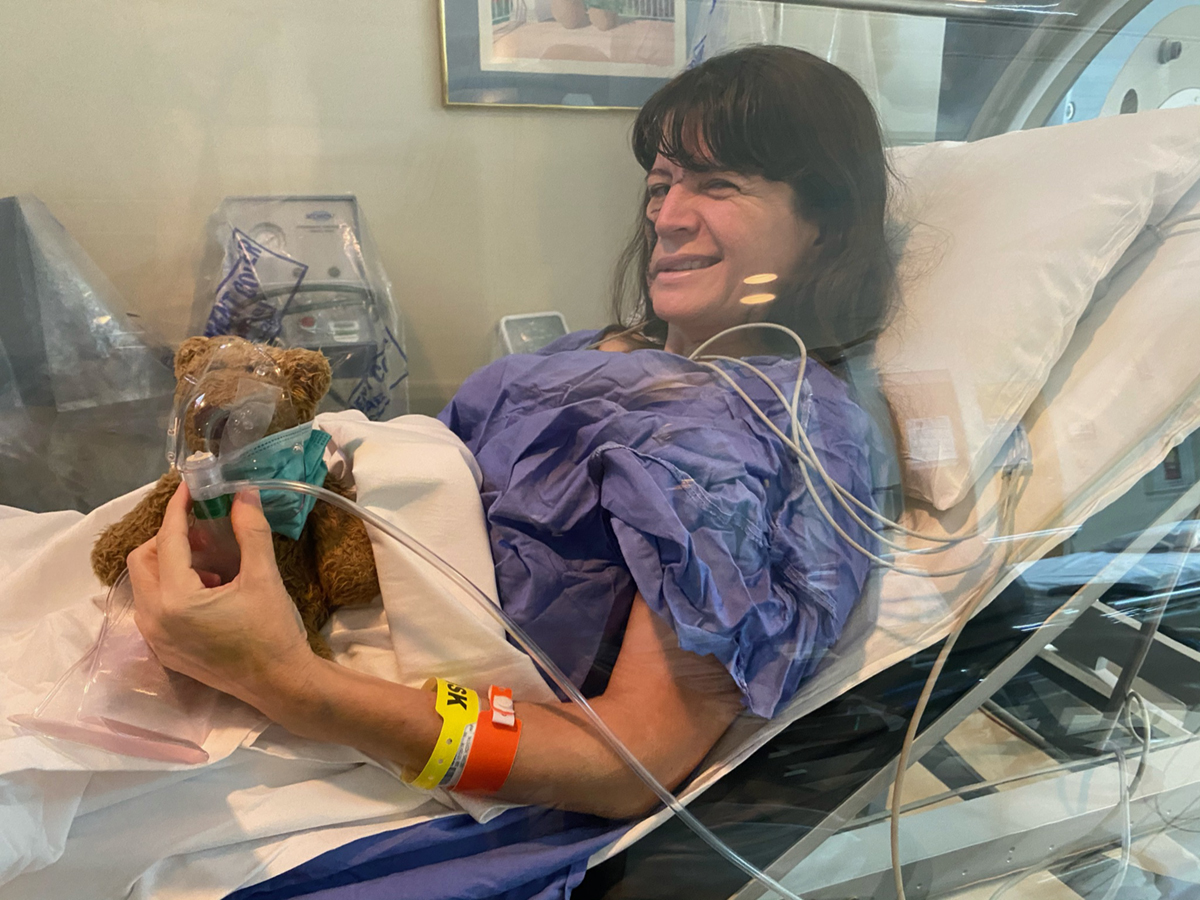 Only a few months after the accident, Cantin is still early into her recovery. She is still experiencing muscle weakness and eye problems, like itchiness and dry eyes, but this is to be expected when she needed more than 100 external stitches and extensive reconstructive procedures. While the tightness in her face will be addressed once her wounds have healed, the physical injuries aren’t the only ones to come out of this horrific incident. She has also overcome the emotional terror of the dog attack through education and empathy.

“Because [my friend] was helping me up, the dog probably saw it as a struggle between us…that’s kind of what the trainer has said,” Cantin said. “The dog was just protecting its owner.”

Cantin said that, overall, something good has come out of a really bad situation, and she wants nothing more than to focus on the positives as her healing progresses in 2022. 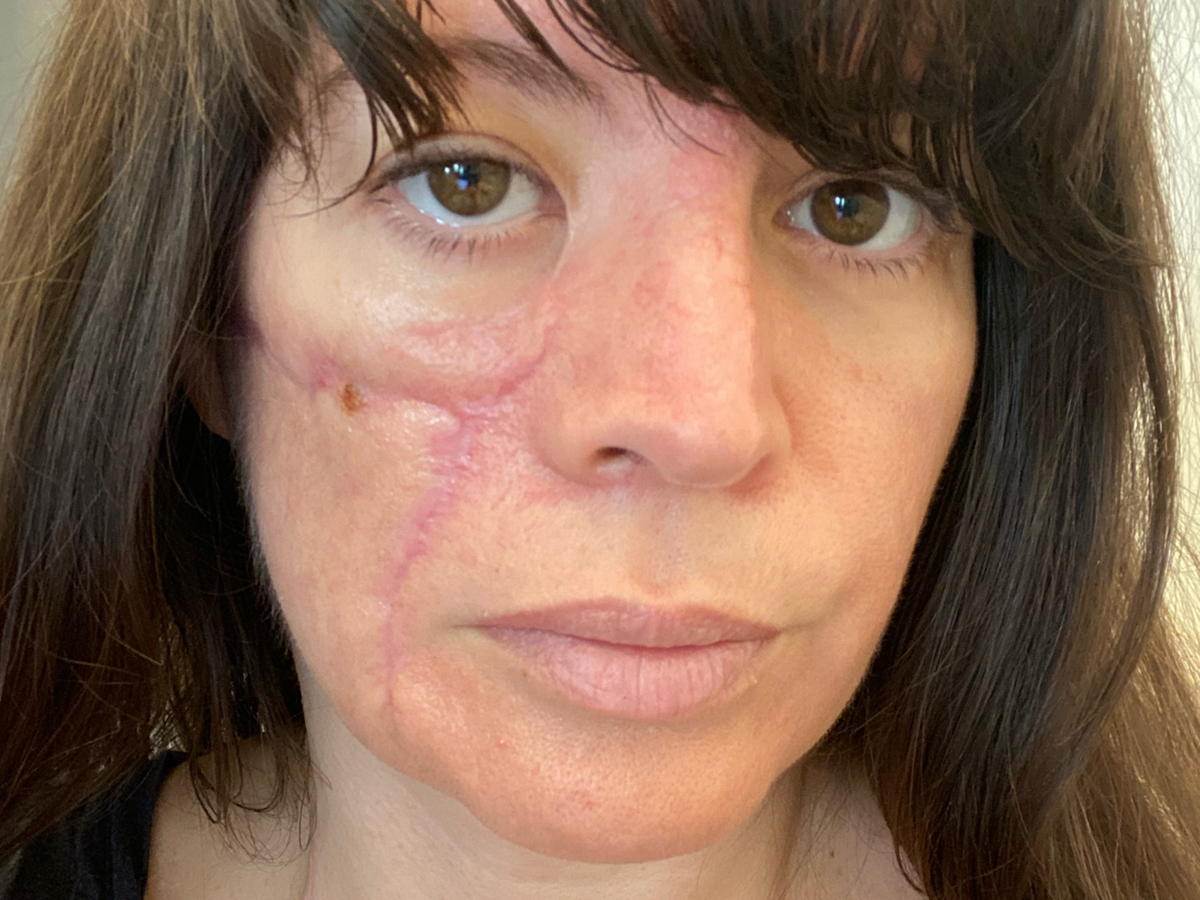 “The treatment was first class all the way,” Cantin said. “That’s why I continue to go back for follow-ups and drive two and a half hours each way. I know Dr. Lim and Dr. Skowronski will get it done. That’s great because, while I’m focused on getting through each day, they’re focused on future stuff. That’s really comforting.”

Animal bites, when not properly cleaned and repaired, can cause something called “cellulitis.” Cellulitis is a bacterial infection that presents as red, warm, swollen and painful skin around the wounded area. If the infection continues to progress, a foul smell and oozing may occur. If left untreated, this infection can spread throughout the body and become life-threatening, which is why it is essential to visit a wound clinic or specialist immediately after a bite has occurred rather than wait for the symptoms of infection to appear.