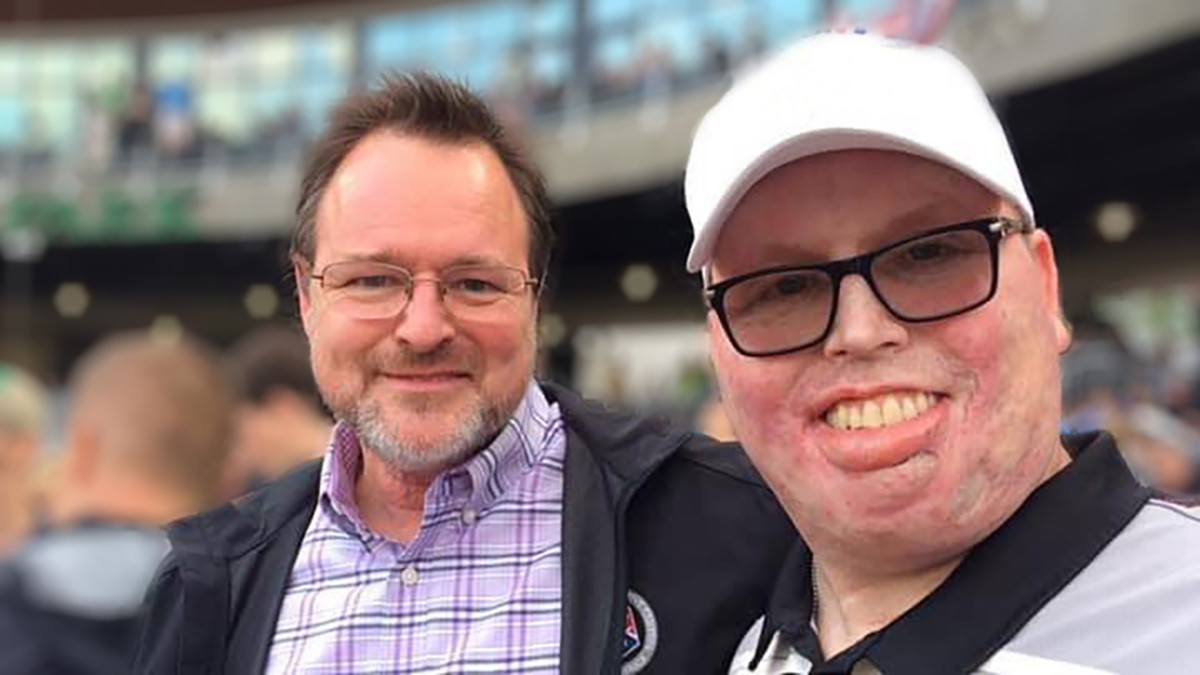 Nearly six months after he was severely burned, Kevin Vann walked out of the Joseph M. Still Burn Center at Doctors Hospital. To this day, room 7 in the Burn ICU remains a constant reminder to Kevin that, in a time of uncertainty, he was given the gift of a second chance.

It was 2016 and only a few weeks before Christmas. Kevin was helping reseal a pump at a plant he was contracting at when a chemical reaction occurred, and the pump exploded. Five hundred gallons of liquified plastic heated to an estimated 572° Fahrenheit poured from the pump, killing a coworker, and deeply burning Kevin on more than 65% of his body.

“I fell in the plastic and it basically stuck me to the floor as it dried. Being covered with and falling into molten plastic, I had to wear the heat. It was like wearing the fire – like I was in a suit of burning plastic,” he said. “By the time help arrived, they had to pry me up off the floor.”

He spent the next 72 days in a medically-induced coma at the JMS Burn Center in Augusta. During that time, he underwent numerous lifesaving and function salvaging procedures. But, for Kevin and his family, the hard times were still ahead of them. Waking up from the coma, though a relief to his wife and son, would prove to be devastating for Kevin.

“The thing about a burn is it’s really two separate nightmares,” he said. “When a patient gets to the burn center and they’re going through the first three weeks, which are critical, the family is living their nightmare. The person who is burned probably knows nothing about it in the moment. Then the patient starts improving and wakes up, and the family is so happy. But now the burn survivor is the one living a nightmare.”

In pain and with his eyes sewn shut, he became belligerent, to the point that the nurses had to use restraints. It was, admittedly, his lowest point. It took the full strength of his support system but, eventually, he came to embrace what happened to him and began making progress in his mental and physical rehabilitation.

“When my attitude changed, it was like my healing started expediting. My predicted stay in here was a year and I was able to leave after 144 days. People don’t realize how much attitude affects your health, your mental health, and your wellbeing,” he said.

This change of attitude not only affected his health but inspired in him another sense of purpose: He wanted to dedicate his life to the service of others, more specifically, burn survivors.

“I feel like my role is to not only help them get back to their normal lives but to help them embrace their burns and their journey, and to see themselves as a burn survivor,” he said.

After years of physical rehabilitation and extensive volunteer training, in 2018 Kevin became a certified peer supporter through the Phoenix Society’s SOAR program. The Phoenix Society’s SOAR program is available at three of Burn and Reconstructive Centers of America’s facilities, including BRCA at Blake Medical Center in Bradenton, FL, BRCA at Medical City Plano in Plano, TX, and the JMS Burn Center at Doctors Hospital in Augusta, GA. It is currently under consideration at other burn centers across BRCA’s network as a form of holistic medicine.

“This is therapy for me,” he said. “Watching patients’ progress and listening to them tell me that they stood up today or walked 10 feet today, there’s nothing else like it. To see them leave the hospital is so bittersweet, because I know that it’s going to be a while before I get to see them again, if ever, but it’s also what I came here to do.”

For Kevin, being a peer supporter means more than meeting with a patient once a week. Sometimes, it means sharing his story with strangers asking about his scars and, sometimes, it means going out of his way to find those in need of support.

“Most people don’t know somebody who is a severe burn survivor,” he said. “Some days, I’ll come in and just go straight to the waiting room and say, ‘Hey, my name is Kevin Vann. I’m a peer supporter. I was burned really bad. If anyone has a loved one in (the burn center), and you want a minute to sit down and talk, I’m here.’ If I can step into a patient’s room or the waiting room or share my story with a stranger and offer somebody some hope for themselves or their loved one, then that’s what I’m going to do.”

He says, like everyone, he still has bad days, whether it’s mentally or physically, but he plans to continue serving people as long as he can wherever he can. He is thankful for his strong support system, including the staff of the JMS Burn Center, and wishes only the best to burn survivors everywhere.