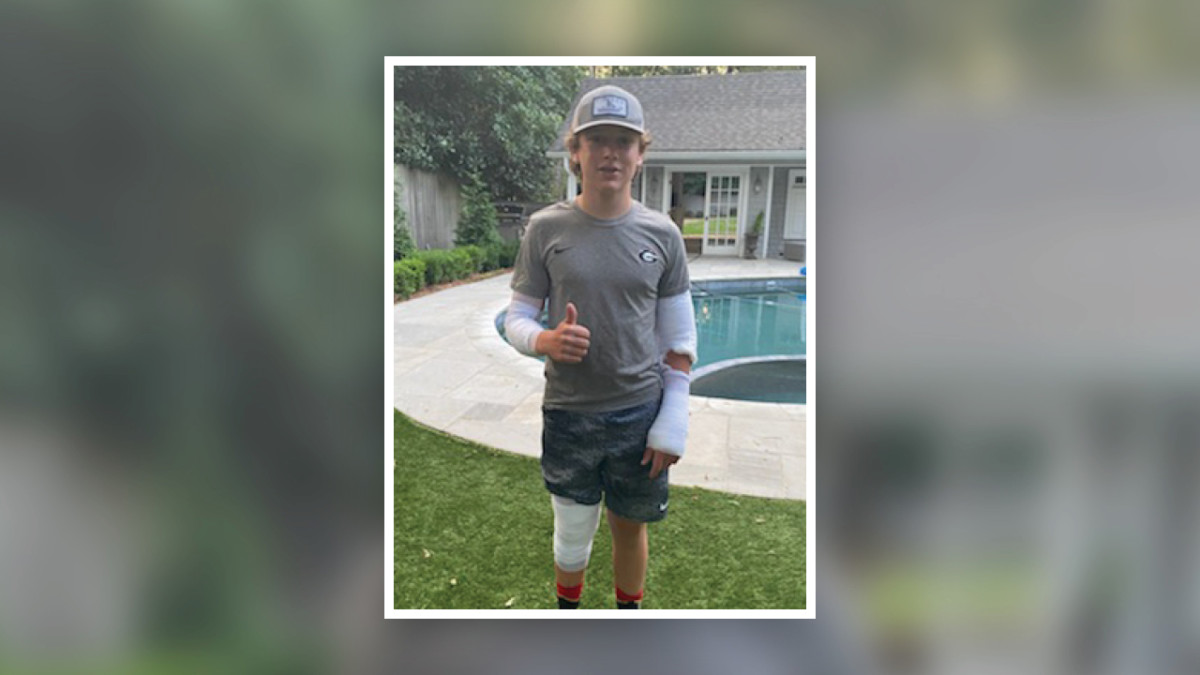 For the first time in then fourteen-year-old John David Thomason’s life, he was going on a cross-country fishing and camping trip deep in the Wyoming wilderness. On July 1, 2021, only a day into the trip, he and his campmates were cooking over an open fire and playing bocce ball when Thomason miss-stepped and fell into the flames.

“He made a bad shot, and he was kind of hopping backward in disappointment over his shot and fell backward on the grade of the bonfire,” said his mother, Lynn Thomason.

Left hand dominant, Thomason landed on his left hand, wrist, forearm and upper thigh, suffering second- and third-degree burns. The camp medical director helped him to the camp bathroom, rinsed off the burns and wrapped them up, but neither of them was aware of how severe his injuries were.

“Apparently, when you get a second-degree burn or worse, you don’t feel it like a minor burn,” said Mrs. Thomason. “So, he was not feeling the nerve endings at the time.”

True to her statement, some second-, third- and fourth-degree burns do not emit pain like severe sunburns or first-degree burns. Instead of feeling a hot, burning sensation that intensifies with touch, those who suffer more severe burns may experience very low pain or no pain, indicating the burn has gone deep enough to affect the body’s nerve endings. This was the case for Thomason, who went to bed that night with only minor discomfort.

The next morning, a camp counselor called Mrs. Thomason and told her what had happened to her son. There was a no-cellphone policy at the camp, and she hadn’t heard from Thomason since he landed in Jackson Hole on June 30. They informed her they were taking him to an urgent care clinic to get his injuries checked out, which at first seemed a bit dramatic to her since they described it as a “minor accident.”

“They drove around awhile, and they ended up going to an urgent clinic,” said Mrs. Thomason. “My cousin, who works with burn education in a roundabout way, said that they’re educated at those urgent care clinics to identify [burns] and send them straight to the burn unit, which was in Idaho. So, I’m very thankful for that—that they knew what they were looking at.”

According to a nurse practitioner at the clinic, Thomason had suffered multiple second-degree burns with one spot in particular that had her concerned. Thomason had been burned near an artery on his wrist and, if not treated soon, there was a possibility that the injury could continue to swell and cut off the circulation to his hand. 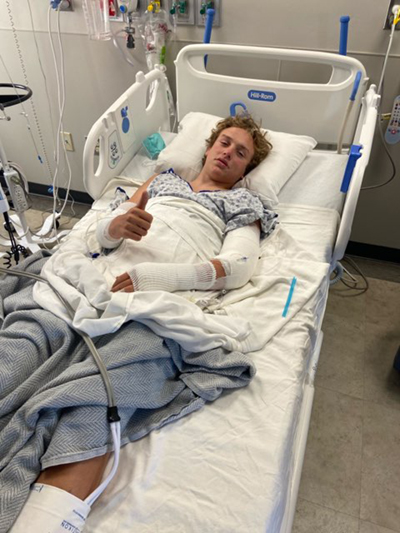 He was referred to Burn and Reconstructive Centers of America (BRCA) at Idaho Falls, ID—the nearest burn center at two and a half hours away, and the burn center that receives many burn patients throughout the year from nearby national parks, including Yellowstone National Park.

The following day, Thomason went into surgery where the specialized burn surgeons of BRCA placed five skin grafts. Thousands of miles away in Georgia, Mrs. Thomason was horrified at hearing his burns were much more severe than everyone originally thought and even more distraught that she was not there with her son in the hospital.

Later that same day, after waking up from his skin graft surgery, Thomason was finally put on a flight back to Georgia, bringing an end to his first camping trip. Wrapped up in sterile gauze and medical tape, the first image of her son was much different than the one she saw just one week ago.

“We were just so thankful to get him home and have our hands on him, but then you couldn’t touch the bandage for a week,” said Mrs. Thomason. “We went in to get it checked out at [BRCA] in Austell, GA, which they were fabulous.”

BRCA’s nationwide system of care expands from the western United States of Las Vegas, NV and Idaho Falls, ID, to the eastern side of the country with locations in Virginia, South Carolina, Georgia and more. Thomason and many patients like him benefit from this extensive burn care system. Often, there is a location closer to home to follow-up at, and, if not, BRCA’s partners at Angel Flight help to fly in faraway patients to their non-emergent appointments at the nearest facility.

Almost a year later, Thomason’s skin grafts have healed. However, some of his scars remain a bit more noticeable, including the area on his thigh where they harvested skin grafts to put on his wrist after the first one failed. Mrs. Thomason is already looking into BRCA’s reconstruction program led by Chief of Plastic and Reconstructive Services Dr. Rajiv Sood to see about having Thomason undergo laser scar revision therapy to minimize the scarring. And, though the cross-country adventure didn’t go as planned, fifteen-year-old Thomason is still pursuing his passion for fly-fishing and believes his scars serve as a cautionary tale about an unfortunate camping accident.

“It felt like we had really great care all the way around,” said Mrs. Thomason. “We were just super thankful that they were close to that Idaho burn unit and then to be transferred back here where [the burn team] trained in Augusta, we felt very fortunate about that as well.”