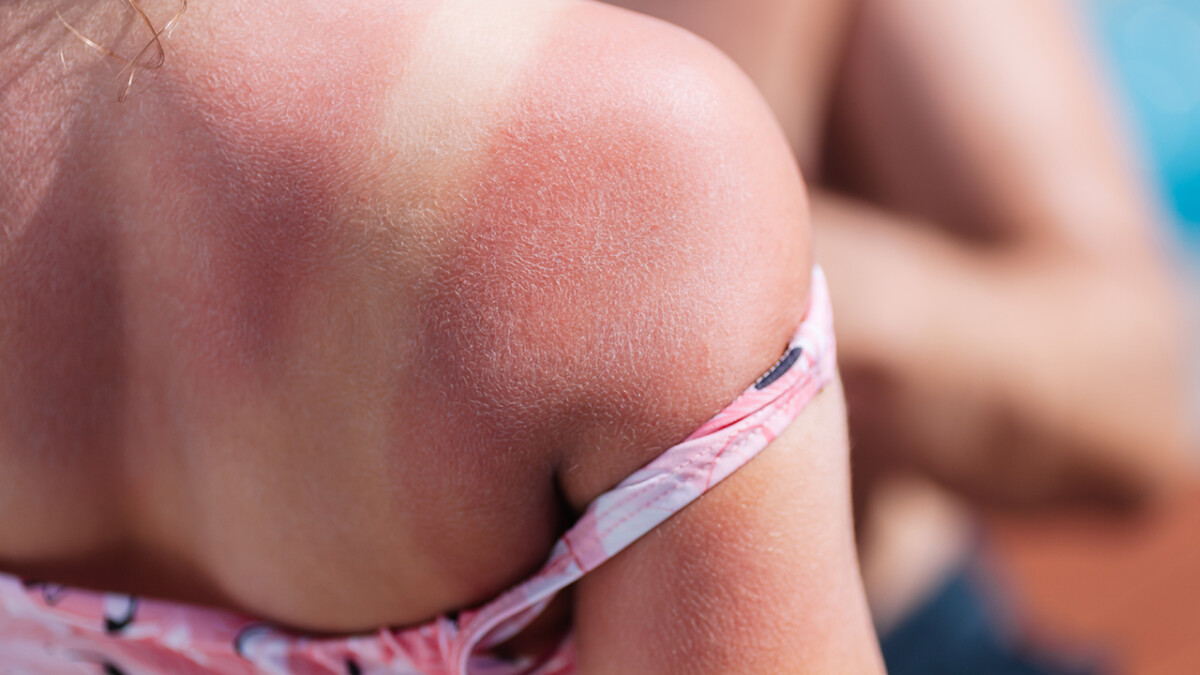 the red back of a girl with a sunburn and white lines from a swimsuit with a hotel pool on the background.

How long does sunburn last? What to know about the short and long-term effects of sunburn

UV or ultraviolet rays describe the type of radiation present in sunlight. Exposure to UV rays can damage the skin, including premature aging, skin cancer, severe sunburn and sun poisoning. Radiation burns, such as sunburns, differ from thermal burns in the amount of time between contact and seeing the burn damage. A thermal burn is immediately apparent after contact with a hot object, but radiation burns may take hours to days to appear. So, does that mean the sunburn will last longer than a thermal burn?

How long does it take for a sunburn to go away?

Depending on the burn’s severity and some other contributing factors, sunburn can last for quite some time.

First-degree sunburn: A minor or first-degree sunburn will typically last three to five days. These burns are superficial, affecting the top layer of skin known as the epidermis. Redness, pain, itching and peeling are common symptoms of this degree of sunburn.

Second-degree sunburn: A more severe burn; this degree of sunburn can last for up to three weeks. These burns affect both the top layer of skin and the underlying layer of skin known as the dermis. Peeling, blistering and rashes are common symptoms of this moderately severe sunburn.

Third-degree sunburn: Though rare, third-degree sunburns are possible. These burns can last months and require medical intervention to help heal. This degree of burn involves the top layer of skin, the second layer of skin and the underlying tissue and fascia. Extreme blistering, discoloration and skin sloughing or shedding are common symptoms of third-degree burns, though fever is also possible.

What factors may contribute to how long a sunburn lasts?

How long does redness from sunburn last?

Most people experience redness as the first indication that they have suffered a sunburn. Because radiation burns take longer to present than other burn injuries, redness can take anywhere from two to six hours to appear. The redness won’t be fully developed until 24 hours after sun exposure. After the first 24 hours, the redness will fade over the next few days. However, as mentioned above, more severe burns will take longer to heal, so the redness may stick around a bit longer if you’ve suffered a second-degree sunburn instead of a first-degree sunburn.

How long does sunburn hurt?

Similar to the appearance of redness, pain from a sunburn won’t fully develop until 24 hours after sun exposure. However, that doesn’t mean it won’t start hurting sooner. Sunburns can begin hurting at around six hours after sun exposure. Most people start feeling the heat radiating from the burn and the pain of taking a hot shower soon after the burn is suffered. The pain of a first-degree sunburn will persist for at least 48 hours before declining. Second-degree sunburn might be more painful, and the pain may last longer, especially if medical intervention is required. To help with pain relief, it is recommended to apply aloe lotion or gel, place a cool cloth on the area and take an over-the-counter pain reliever.

Unlike the other degrees of sunburn, third-degree burns are noticeably less painful or even painless. Because of this, you should take extra precautions to avoid further injury to the affected area and seek medical attention as soon as possible.

How long does swelling from sunburn last?

Swelling from sunburn should begin to decline after the first 24 hours. To help reduce swelling, you can prop up the affected area, apply a cool cloth, take anti-inflammatory medications or apply an anti-inflammatory cream.

How long does peeling from sunburn last?

After suffering a burn, the skin becomes damaged and dry, causing the skin to shed the dead skin cells. Peeling can occur with first- and second-degree burns. Peeling may not happen right away. It is one of the later phases of the burning process, occurring up to three days after suffering the burn. Flaking and peeling allow the upper layers of dead skin cells to fall off, revealing a new, rejuvenated layer of skin underneath. This peeling phase can go on for a few days, and, during this time, sun exposure should be limited to ensure the new, sensitive skin has time to heal.

What should you do about blisters and peeling from sunburn?

Sunburn blistering is indicative of a second-degree burn. Blistering from a sunburn begins within 24 hours of sun exposure and can last up to a week, depending on the size or number of blisters. If you suffer a sunburn blister and the blister is intact, it is not recommended to break it. While some believe stagnant fluid breeds infection, an open wound opens the door for harmful bacterial colonization. If the blister is already broken, have no fear! With proper wound care and good hygiene, the wound should heal within a week. So, how should you care for peeling skin and blisters?

It is not recommended to scrub the peeling skin or use any form of dermatological peel. This may further irritate or damage the burned skin. Instead, keep the area moisturized with a gentle, unscented lotion or aloe and wait for the area to shed the skin naturally. Most sunscreens have lotion in them. You can swap your regular moisturizer for sunscreen.

It is recommended to seek medical attention for multiple blisters or large blisters as the burn might require medical attention. However, dressing small sunburn blisters in sterile gauze with antibacterial or antimicrobial ointment can help progress the healing process and prevent infection.

What does it mean if the sunburn turns into a rash?

A sunburn that turns into a rash is typically known as sunburn sickness or sun poisoning. While referred to as “sun poisoning,” this condition is considered a severe reaction to prolonged or unprotected exposure to UV rays that may be characterized by severe sunburns or a rash. Sun poisoning can pose serious health complications if not treated right away. Dehydration is the number one concern for sun poisoning along with infection, increased risk of skin cancer and severe sunburn.

A sunburn rash will appear sooner rather than later, meaning within six hours of exposure. However, you are likely to experience the other more immediate symptoms of sun poisoning first, such as:

Typically, sun poisoning can be diagnosed and treated with lots of fluids within 24 to 48 hours. However, more severe cases may prolong the healing process, possibly paired with pre-existing conditions.

Solar urticaria, a rare allergy to sunlight including both UVA, UVB and visible light, can also cause rashes and hives on the skin. Sun-damaged or exposed skin can stimulate your immune system to treat the affected skin as foreign bodies, creating rashes.

In the end, does sunburn turn into a tan?

After all the pain and suffering, will the sunburn be worth it? Whether or not your sunburn turns into a tan can depend on your complexion. Darker skin tones are less likely to burn due to the amount of melanin in the cells that protect against sun damage. Those with fairer skin tones are likelier to burn, and whether that burn turns into a tan is dependent on the characteristics of the skin and the melanin. For example, those with auburn hair, fair skin and freckles are at an increased risk of burning but are less likely to tan.

When should you call a doctor?

While sunburns are commonly considered mild, non-emergent burns, there are some cases when a medical professional should be consulted. Please seek medical attention if you begin to experience any of the following:

Radiation burns, such as sunburns, can cause damage to the cellular structure of the skin and lead to cell mutations or cancer. Some people are more likely to get skin cancer and hyperpigmentation than others. If there is a history of skin cancer in your family, avoid prolonged exposure to UV rays and always wear UV protection such as sunscreen, hats and sunglasses.