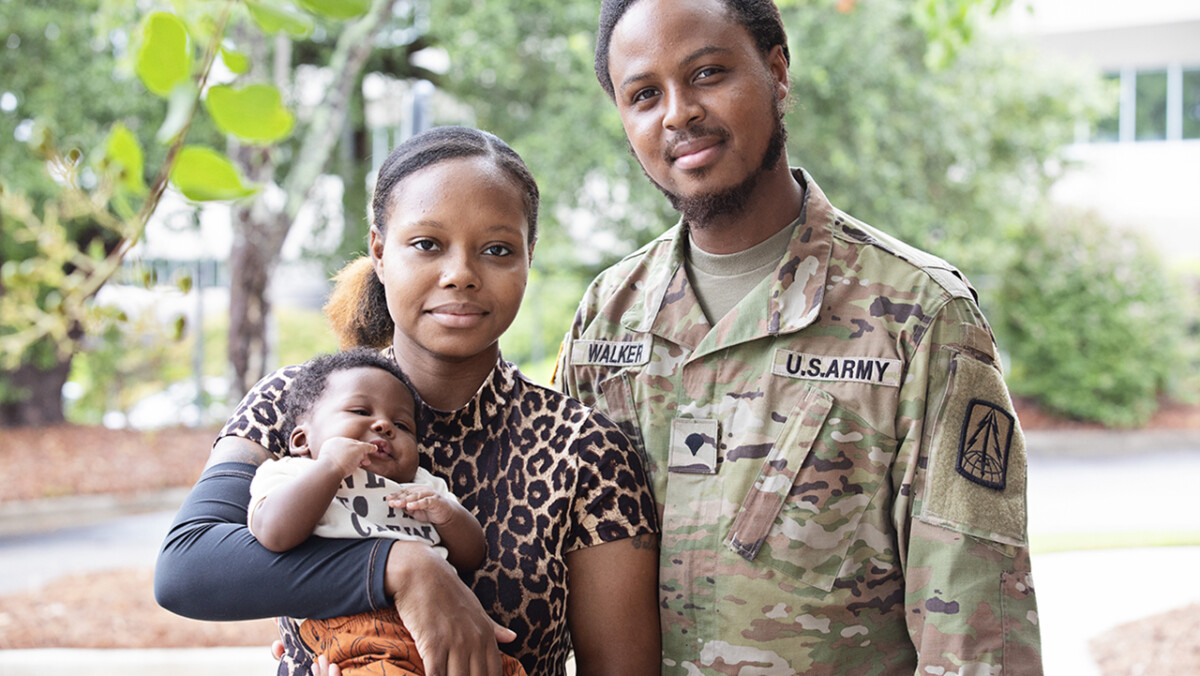 Reconstruction after gunshot restores veteran’s ability to hold her baby

Pregnancy comes with several mental and physical challenges. From fear and excitement to hormonal changes and medical conditions, there can be a lot of stress on the mother and father. For 27-year-old Cheyenne Walker, her pregnancy came as a welcomed surprise. No one could have guessed that she would be fighting to keep her unborn child alive within a few days of a positive pregnancy test.

“I found out I was pregnant a few days before the accident happened,” Walker said. “So, they didn’t think the baby was going to make it.”

A military veteran with a concealed carry permit, Walker and her active military husband carry weapons on their person outside the house. On November 7, 2021, as they were getting ready to leave, Walker went to holster her weapon when the gun went off in her hand, shooting her in the chest and arm.

“It was a manufacturer’s defect,” Walker said. “There was something wrong with the weapon.”

At first, Walker didn’t know she had been shot. The bullet entered the upper half of her breast and came out the bottom before entering and exiting her bicep, but she didn’t feel any pain. It wasn’t until she asked her husband, who was looking at the hole in her arm, what was wrong that Walker noticed the pool of blood on the floor. When she realized what had happened, only one thing was on her mind: her unborn child.

“When the paramedics came, all I kept saying was, ‘I’m pregnant. I’m pregnant,’” Walker said. “That’s all I cared about. I didn’t even care about the hole in my chest or arm. I just kept telling them that I’m pregnant, make sure my baby is okay.”

To her emergency room doctors, Walker’s wounds were a miracle. For the angle at which she held the gun, the bullet should have gone through her chest and out of her back or lodged somewhere in her body, causing potentially life-threatening injuries. Instead, the shot went sideways, avoiding major organs and vessels, going clean through her breast and arm. To Walker, there was no other explanation but a guardian angel.

Once stabilized, she was referred to the Joseph M. Still Burn Center of Augusta, GA, Burn and Reconstructive Centers of America (BRCA) headquarters, where she was treated by plastic and reconstructive surgeon Dr. Rizal Lim.

“The first time I met Cheyenne was in the clinic,” Dr. Lim said. “She was referred to me because she had a gunshot wound through her right arm and paralysis of the arm. She was also pregnant, which made things much more challenging.”

The traumatic injury to Walker’s arm had impaired the function of her dominant hand. Her hand was stuck in an extended position, unable to close. This terrified Walker, who feared the loss of function would lead to an inability to eventually hold her child. In her mind, she saw the precious first moment doctors handed the newborn to her to hold for the first time begin to fade away.

“I told Dr. Lim that my biggest thing was to be able to hold [my baby] after I gave birth because I was terrified that I wouldn’t be able to,” Walker said.

Though the bullet had gone clear through, there were still bullet fragments that had to be removed from her arm before she could undergo an MRI to figure out how much damage her arm had suffered. She was diagnosed with a partially severed nerve that affected the flexors of her fingers. Early in her pregnancy, the risks of surgery were severe. During the first trimester, there was a greater chance the anesthesia, especially IV sedation, and the trauma of surgery could cause the death of an unborn child. Both patient and surgeon were aware of this and plotted out the course of the pregnancy and when it would be best to perform the surgeries.

“We were very concerned,” Dr. Lim said. “It’s not a usual situation, and we had to accept certain risks to proceed forward.”

One option they considered was to perform surgery as she advanced in her pregnancy while carefully monitoring the fetal heartbeat. The other option was to hold off on performing surgery until the baby was born. Both had a certain amount of risk and, while the second option reduced the risk to the unborn child, it increased the risk of Walker’s arm muscles becoming weaker over time, resulting in minimal nerve recovery and limiting her functional outcome.

“My concern was that if we had done the surgery at a later time, she would not have had much or any nerve recovery,” Dr. Lim said.

Walker, her husband and Dr. Lim discussed all the possibilities in depth before deciding the best course of action was to perform surgery in her second trimester as the risk of fetal death decreased substantially after the first trimester. After making sure she and her baby were healthy, they began the first surgery to remove the bullet fragments before moving on to the reconstruction. To return function to Walker’s hand, Dr. Lim performed a nerve graft and transplant where he took pieces from a nerve in her arm and connected them to the severed nerve to promote regeneration.

“When replacing nerves, it’s generally better to use the patient’s nerves because it integrates faster and may lead to better overall graft take and nerve function in the long run,” Dr. Lim said. “To reconstruct the nerve, a longer piece of the nerve is cut into shorter segments to be able to bridge the gap.”

The textbooks, Dr. Lim explained, give a nerve regeneration time of three to six months from the time of surgery, with the nerve regenerating only a millimeter a day. However, Walker began to show signs of function at her post-operative appointment just one month later. Though unable to make a tight fist, Walker was able to flex her fingers.

After months of occupational therapy to strengthen her fine motor skills, Walker was able to hold her healthy baby boy. Though she is still working to regain the full strength and function of her right arm and hand, Walker says that between her healthcare team and her son, she’s in good hands.

“[The baby] is about ten pounds now, and I’ve been lifting him with my arm,” Walker said. “It’s helping me in a way to get my muscle back, so I don’t lose the muscle in my arm. He is helping in his little way without knowing it. Lifting him, changing him, stuff like that is getting my arm moving.”

According to Dr. Lim, Walker’s outlook is better than anyone could have hoped, and her almost year-long recovery may be close to coming to an end.

“She needs more therapy,” Dr. Lim said. “She needs to regain more strength, but she’s got sensation. She’s got her motor function. She’s able to hold her baby, which is what her goal was at the end of all this. My guess is that once she’s done with her maternity leave, she’ll be able to continue rehab on her hand and probably be able to go back to work.”

And for that, Walker says, “I appreciate him. He was like an angel. He showed up and made everything happen, and he’s still looking out for me.”

One of the most critical steps in the healing of a catastrophically injured patient is the process of reconstruction. At Burn and Reconstructive Centers of America (BRCA), our plastic and reconstructive surgeons use their knowledge and experience of dermal substitutes, skin grafting, tissue expansion, laser therapy, flap reconstruction and microsurgery to help rehabilitate burn, wound and trauma patients.

For more information about our reconstruction program and services, please click here. If you are suffering from a traumatic injury, please don’t wait to seek help. Call our experts 24/7 at (855) 863-9595 for your non-emergent needs. For emergencies, please call 911.