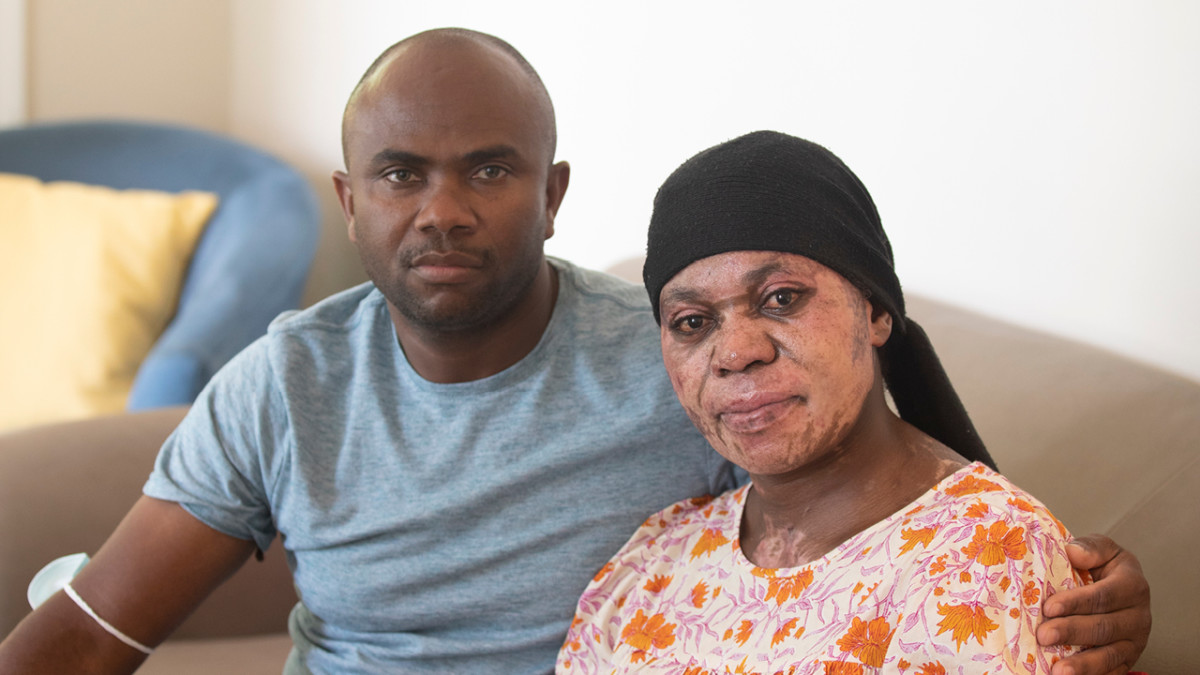 In the early morning hours of March 8, 2021, Guerda Fontaine was prepping lunch boxes for her two children when turning on the propane tank engulfed her in flames.

“Upon the propane exploding, the house itself exploded, the windows exploded, everything just exploded,” said Mrs. Fontaine. “I just heard the explosion and didn’t really understand what had happened at the time.”

The Haitian native and her family live without electricity, along with a large portion of the Haitian population. So, that morning just like every other morning, Mrs. Fontaine made her way to their kitchen by candlelight to prep her children’s lunches when the propane tank ignited.

Her husband, Roberto, and their kids safely made it out of the blaze, but Mrs. Fontaine suffered severe second- and third-degree burns to 55% of her body. They took her to a local hospital in Haiti. Unfortunately, health insurance was unavailable, and the hospital had limited resources for her care. So, to get her the best care possible and to save her life, Mr. Fontaine worked closely with a non-governmental organization, Fondation Enfant Jesus (FEJ), to help transfer her from Haiti to the Joseph M. Still Burn Center at Doctors Hospital of Augusta, GA, the largest burn center in the United States. Mrs. Fontaine arrived at the JMS Burn Center four days later on March 12th in critical condition. While her husband was still going through the system to join her in America, she was admitted to the burn intensive care unit. She underwent several surgeries, including debridement and multiple rounds of skin grafts.

“I didn’t know much when I was in the hospital at first regarding my children. But when my husband came, and I started to recognize him and talk to him, I felt rejoice to hear that he was okay and our children were okay,” Fontaine said.

When Mr. Fontaine finally made it to Georgia after obtaining an emergency VISA and a passport, he worried about the wellbeing of his wife but also about where he would stay during the extent of her care.

“I knew I was coming to the U.S. to come to the hospital to be by my wife’s bedside. But, at the same time, I knew that there was no one within the foundation [FEJ] or my family that lives in Georgia, so I did not know where I was going to go,” Mr. Fontaine said. “But the way everyone has made me feel, this will always be another family away from home for me.”

The Burn Foundation of America intervened to give Mr. Fontaine food and a place to stay at the Chavis House while his wife received care at the burn center.

“For the Chavis House, I cannot express enough how grateful we are. Although I am new to the country, and this is my first time, I am very pleased to know that there was somewhere able to receive us with open arms,” Mr. Fontaine said. “In a time when I missed my children, it was nice to be in an environment where I felt as if I was home.”

Chavis House not only assists the families of loved ones recovering in the burn center but burn survivors from out of town who need a place to stay during their follow-up appointments over the weeks, months and years.

“When I was getting ready to be released from the hospital, I was worried,” Mrs. Fontaine said. “I did not know how I would be received at home based on my scars and my disfiguration. But knowing that the house was there to receive us gave me a sense of belonging. Made it possible for me to carry on with the healing process that I have to go through.”

Though Mrs. Fontaine has since been discharged, her recovery is still in the early phases. Doctors say she will most likely need at least a year of acute treatment as well as professional attention for her post-traumatic stress disorder (PTSD).

The Fontaine’s are currently continuing their healing journey with family members in America before Mrs. Fontaine is well enough to travel back to Haiti, where the couple can begin rebuilding their lives with their children.

“I knew without the hospital and the burn center that my wife would have died because of the fact that we do not have that kind of care back home,” Mr. Fontaine said. “The hospital making themselves available to people of different countries is one thing I am very grateful for.”

*This interview was translated by Himler Francois, board member of FEJ-USA. The FEJ organization is dedicated to cultivating the impoverished communities of Haiti through education, advocacy, health services and entrepreneurship initiatives.

“I want to take the opportunity, as the board member that I am, to thank Senator Raphael Warnock’s office for his assistance in making this happen. Because of the urgency and the COVID restrictions and Haiti’s infrastructure, we had to reach out to his office for assistance, and that’s how all this came to action. It was a lot of pieces put together, and it would be robbery if I didn’t thank all these other people.”