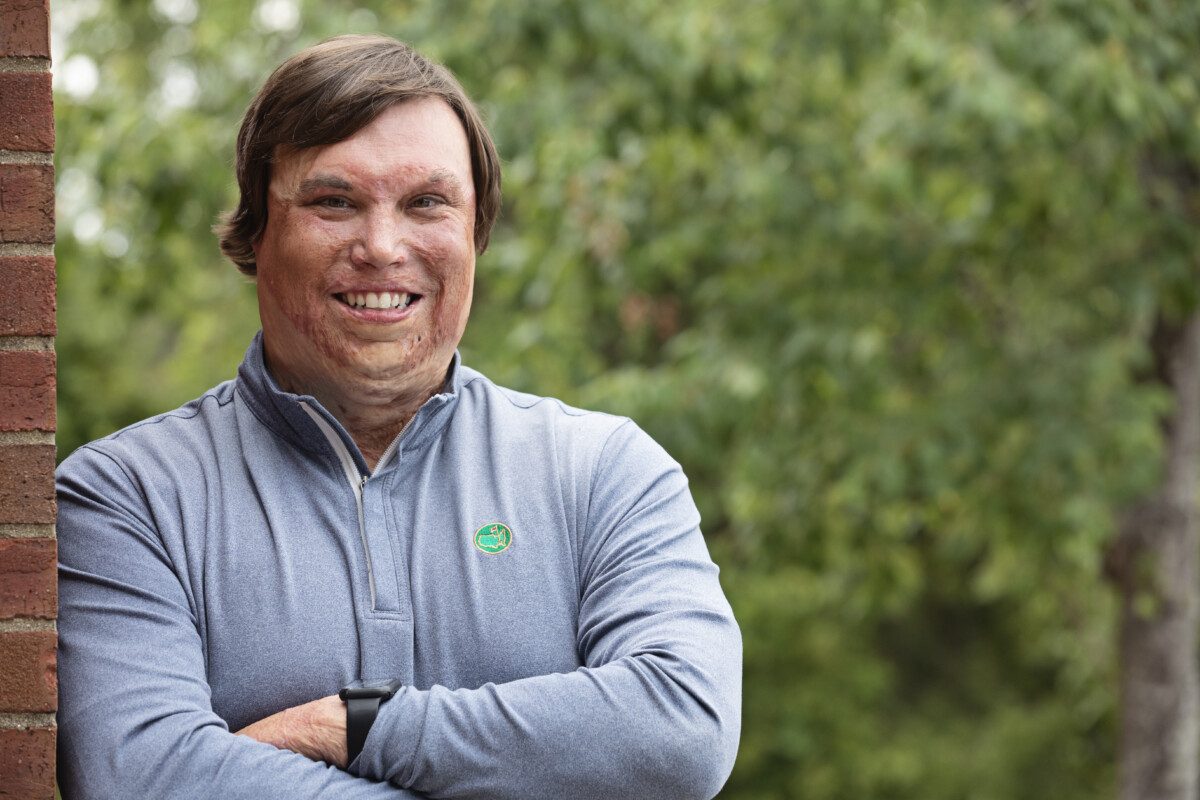 In retrospect: A fourteen-year reflection of burn care and recovery from burn survivor Connor McKemey

Burn care is a relatively new specialty as far as healthcare goes. Each patient treated at Burn and Reconstructive Centers of America (BRCA) sets new expectations for recovery and redefines the possibilities of life after the burn center as they push the boundaries of burn care. Burn survivor Connor McKemey has been defying clinical odds and surpassing estimated physical limitations since he was severely burned in 2008 at thirteen years old.

“I was a typical middle school kid,” McKemey said. “And I had a brilliant idea for a date that night. I was going to do this little romantic thing. I had this outdoor fireplace at my house, smores, all of it.”

It was windy that night, making it difficult to get the fire going and dangerous when it began blowing sparks out of the fireplace. McKemey was standing near a gas canister when a spark ignited the fumes, and the container exploded.

“It just kind of exploded on me,” McKemey said. “All I could see was this red-orange glow around me. My mom came through the window; she heard the explosion as the neighbors heard the explosion. Everybody came and tried to put me out with towels, cushions, whatever they could find.”

He remembers seeing the skin peeling off his hands and his rolled-up sleeves, which were all that remained of his shirt. The rest of his body was hidden under the towels used to extinguish him, leaving him in the dark on how severely he had been burned. It wasn’t until he arrived at the Joseph M. Still (JMS) Burn Center of Augusta, GA, the headquarters of BRCA, that his family and doctors would understand the extent of his burns.

“They did their assessment, and I had suffered burns on 90% of my body with 75% being third-degree burns,” McKemey said. “My dad was actually on his way home from Iraq that night, he had been serving there for nine months, and their initial plan was to try to keep me alive long enough for him to see me.”

The dangers of burn injuries surpass what is visible on the outside to deeper, hidden issues, including airway burns, smoke inhalation, dehydration, hypothermia, reduced circulation, tissue death, infection and more. The acute and critical phases of care are the most trying for the burn team and the patient. The path to recovery is not straightforward and often involves many periods of setbacks which may involve graft death, infection, the possibility of amputation and more. During this phase of care, severely burned patients are placed in a medically induced coma for comfort and to give their bodies the energy to heal.

McKemey was in this medical state for two months before he was slowly weaned from the coma and brought back into reality, where he was on a ventilator, in pain, confused and unable to communicate with the family members at his bedside.

“The hardest time for me in the hospital were those first few weeks,” McKemey said. “When they woke me up from the medically induced coma, I still had the breathing tube in. I woke up, and I couldn’t talk to anybody. My parents had the alphabet and would try to put words together based on me shaking my head or nodding my head.”

His healthcare team, including Director of Pediatric Critical Care at the JMS Burn Center, Dr. Rich Cartie, estimated McKemey would remain in the hospital for nine to twelve months more while they continued working on his skin grafts, pain management, reconstruction and rehabilitation. In his incapacitated state, McKemey had lost a significant amount of weight and muscle mass, weighing only 125lbs at six feet tall. Considering the severity of his burns and the state he was in, his healthcare team had doubts about his physical abilities and whether he would be able to walk again.

An energetic child with two brothers, McKemey was very active in sports, particularly high contact sports. He loved playing lacrosse and football and had dreams of playing collegiately. Though all those dreams and high aspirations seemed almost unachievable, he was determined to pick up right where he left off.

Two and half months after his accident, McKemey took his first steps down the hall of the burn intensive care unit (BICU). Along with that, eighty to ninety percent of his grafts took the first time around, a rare occurrence that set him up for a quicker recovery and a better-than-expected outcome. From there, it was up to him to determine his recovery path. Motivation is a crucial component of recovery. Often those willing to participate in physical therapy and the care plan despite the pain and adjustment period are the ones who improve their quality of life the most. And McKemey was determined to find his way back to the things most important to him.

“A lot of people will ask me questions about how I did things,” McKemey said. “And my easiest answer to those questions is: I was a kid. I didn’t know much better. I also felt like I didn’t have any other choice. It was either get better or don’t get better. Those were my options.”

As he improved, he was transferred to an inpatient rehabilitation facility before finally going home months ahead of schedule. But his rehabilitation didn’t end there. In terms of physical condition and ability, he had far surpassed expectations for his burn severity, but he wasn’t satisfied until he could return to playing sports.

“I had high aspirations and things that I wanted to do,” McKemey said. “So, we had a friend who was a personal athletic trainer that greed to train me like I was an athlete recovering. It was a total body rehab recovery, but he was like, ‘Let’s just act like you blew out both your shoulders and both your knees, and we’ll start over from scratch and go from there.’”

As an adolescent willing to do whatever it took to get back to lacrosse, McKemey’s journey was not simple, and none of the doctors could tell him what his body would be able to handle. With 75-90% of his skin cultured epithelial autografts (CEAs), no one knew what amount of stress the grafts would be able to take during a sporting match or what complications might arise, but McKemey’s provider’s assured him that they would patch him up as many times as it took to reach his goals.

“I had such a great relationship with Dr. Cartie,” McKemey said. “He was always the first person that we would reach out to when something was going on, or we had any questions. I was given the freedom to try things and do things while having the comfort of knowing that I could always come back here, and they would take care of me.” 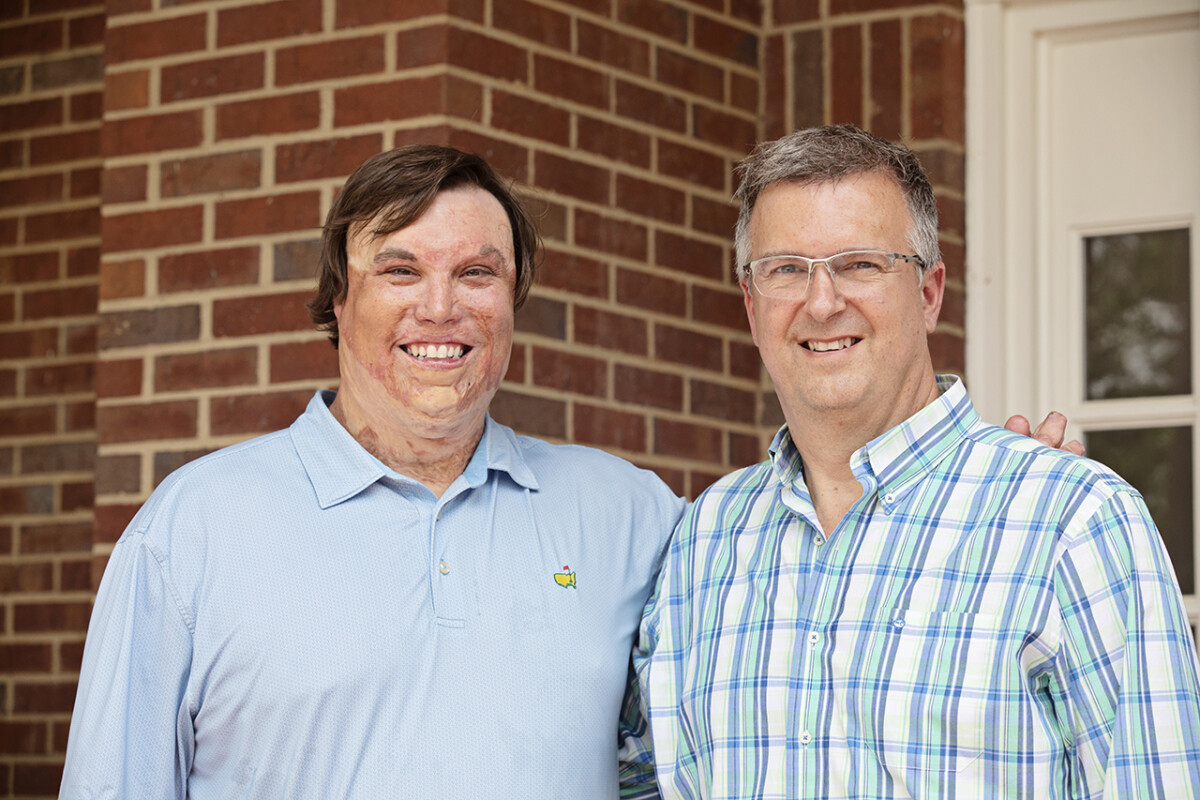 Throughout his years playing high school lacrosse, McKemey would experience re-occurring wounds on his feet, infections and, at one point, a broken toe. And each time, he would return to the JMS Burn Center for Dr. Cartie and Dr. Robert “Fred” Mullins to fix him back up. Because of this constant support, McKemey did go on to play collegiate lacrosse, eventually taking a job as the assistant lacrosse coach at his college.

However, the pandemic changed many things for many people, and contact sports took a hit in 2020. McKemey found himself sitting in his home alone with his thoughts after the 2020 lacrosse season abruptly ended. That was when he began writing, planning and thinking of ways his experiences could help brighten a world that had recently gotten so dark.

“I was sitting there looking at the state of the world and the state of the country and the people around me that were struggling,” McKemey said. “If I could help just one or two of those people, that would be more than I was doing sitting on the couch.”

He decided to leave his position coaching college lacrosse to fulfill what he felt he was called to do: tell his story. McKemey has since launched a career as a motivational speaker to uplift and inspire those that have found themselves in a hopeless situation, similar to the one he found himself in at just 13 years old. It was a way to help others and a way to heal himself.

“I’ve been speaking really ever since I got out of the hospital,” McKemey said. “It was something my mom always had me doing, and I think it really helped me in high school—being able to talk about and work through it.”

He hopes to eventually publish a novel to fill in all the stories he doesn’t have time to talk about in his 40-minute speeches. Until then, he continues to build his audience and story as each year brings new memories and insights into his talks. And while his story continues to build and surprise him, there is something familiar to him about speaking. In fact, there is only one thing comparable to the feeling he gets stepping onto the stage before a speech, which is stepping onto the field before a game.

“That feeling, as uncomfortable as it is at times, reminds me I’m alive,” McKemey said. “I want to help people. I want to speak to people and share a positive message because I feel that’s what people need to hear. If I’m able to help just one person in that venue at that moment, then I did what I was supposed to do because that was the life that needed it most.”