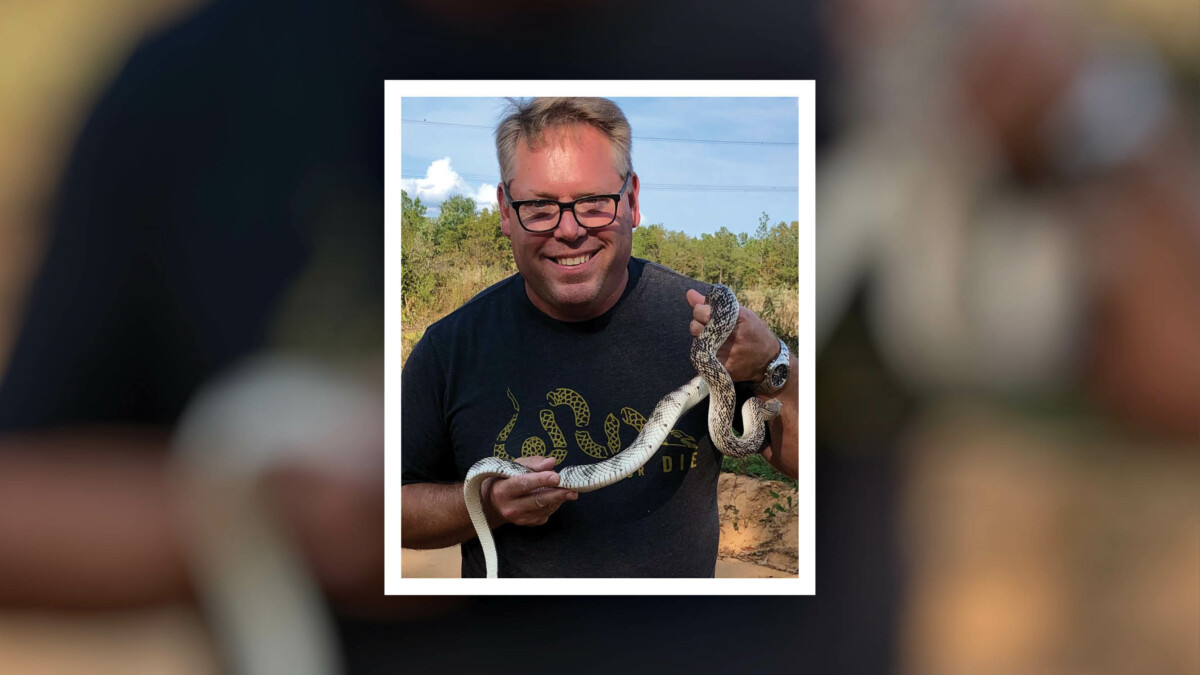 Cary Howe isn’t your average hobbyist. He is what is known as a field herper. Like bird watchers, field herper’s search for and sometimes photograph reptiles and amphibians, including salamanders, frogs and venomous and nonvenomous snakes. With 20 years of experience handling and photographing reptiles, Howe has encountered thousands of snakes without incident, until recently.

“We’ve done this, goodness, literally hundreds of times with not just snakes, but lizards and turtles and frogs and salamanders, but I got a little too comfortable,” Howe said.

On July 17, 2022, Howe and his son drove the back roads in Aiken County, SC, searching for a particular kind of snake: a Carolina pygmy rattlesnake (Sistrurus miliarius). Pygmy rattlesnakes are venomous snakes native to the southeastern United States that only grow to 20 inches long as adults. Over the summer, Howe gave himself and his son a challenge: to find as many pigmy rattlesnakes as they could in different counties of South Carolina and Georgia and photograph them.

“My son and I, we enjoy our time together out in nature, and it’s just a great opportunity for us to bond and have a common interest,” Howe said. “We had challenged ourselves this summer to find as many pygmy rattlesnakes in as many counties as we could in South Carolina. So, he was with me on this particular night.”

That Sunday, they got lucky because a pygmy rattlesnake slithered out in front of their car as they were “road cruising.”  The father and son team pulled over and set about staging the snake for photographing. They’ve been active in this hobby long enough to know not to handle the snake and came prepared with special tools, such as a snake hook and, for the first time during this outing, a spoon rest.

“After I took my photos, I decided to try this new technique,” Howe said. “So, I took what is basically a spoon rest and put it over the top of [the snake] so it would curl up into a nice defensive position. The only problem is that I did not consider the groove in the handle.”

Eager to get out from under the spoon rest, the snake began to move under the handle as Howe went to pick up the dish. Quicker than he could pull away, the venomous snake bit Howe on his right middle finger, envenomating him. But, unlike most people in his situation, Howe didn’t panic, even letting his son finish taking pictures before getting back in the car and heading home.

“I knew a few people in our hobby who had been bitten by small rattlesnakes or copperheads and did not seek medical attention for it and survived, even kept their digits,” Howe said. “I thought I might just kind of watch it overnight, you know, to see how it reacted.”

Within 48 hours, Howe’s hand had doubled in size, and the pain was excruciating. He decided it was time to seek medical attention and drove himself to the Joseph M. Still (JMS) Burn Center of Augusta, GA, Burn and Reconstructive Centers of America (BRCA) headquarters. There he was cared for by Dr. Rizal Lim, who determined he needed nothing more than pain medicine and antibacterial ointment.

“With venomous snake bites, the venom itself tends to cause a lot of coagulation of tissue and blood vessels, so what you see is a larger area of tissue destruction,” Dr. Lim said. “When you have a bite from a nonvenomous snake, the primary issue will be a secondary infection. Any animal’s mouth carries bacteria. When the fangs or teeth penetrate the skin, they reach a deep space where the bacteria can find a new home for itself and create a secondary infection in the body.”

Depending on certain pre-existing conditions, the type of snake and the amount of venom the snake injects, the bite can be more or less severe. In Howe’s case, though the snake was venomous, it was a smaller species of hemotoxic snake and didn’t cause tissue damage to the point of necrosis or death. Hemotoxic venom works by breaking down or destroying the tissue, eventually causing tissue death which can lead to amputation of the affected body part. Another type of venom is neurotoxic, which is potentially deadly as it can cause damage to vital organs or organ failure. This venom is associated with some of the deadliest snakes, including cobras.

“Just remain calm, first of all,” Howe said. “They used to tell you to do things like suck the venom out as quickly as possible and do a tourniquet to keep the venom from moving up the arm and those types of things. Now they say no, that’s not the approach to take. Just get someone to drive you to the closest [emergency room]. I would say 99% of ERs will have anti-venom, if it’s necessary.”

Whether or not a venomous snake bites you, both Howe and Dr. Lim agree that it is best practice to seek medical attention even if you feel you might not need it as a precaution against potential tissue death, anaphylactic reactions and infection.

“If a snake bites you and you don’t know what type of snake, the best thing you can do is see a healthcare provider,” Dr. Lim said. “If there is a delay seeking medical attention, then there is a risk of infection or more tissue destruction.”

“Keep your distance as snakes will typically try to avoid contact with humans and go the other direction (sorry to ruin so many great snake attack stories),” Howe said. “In the unlikely case that you are bitten the chances of dying from a snake bite are slim.”

While bites are an infrequent hazard of the hobby, Howe admits he doesn’t do it for the thrill but for the chance to bond with his son and educate others on nature’s beauty. By sharing his experiences and photographs, he hopes others will be open to learning more about amphibians and reptiles and destigmatizing these typically shy, non-aggressive animals.

“The more you know and the more you’re educated about venomous snakes or any snakes, the less fear you have of going out into the woods or the swamps because you know what to expect. It’s all about education,” Howe said.

Depending on pre-existing conditions and the risk of infection, snake bites can cause severe or life-threatening issues. Signs of an infected snake bite include redness around the puncture marks that, over time, spread and become more profuse. Tissue death or necrosis begins as a bruise or purplish-colored area that continues to darken, possibly even going numb. If signs of either of these conditions are present, please seek medical attention.

For more information about tissue death or wound infection, please visit our website at www.burncenters.com. If you are suffering from a snake or animal bite, please don’t wait to seek help. Call our experts 24/7 at (855) 863-9595 for your non-emergent needs. For emergencies, please call 911.